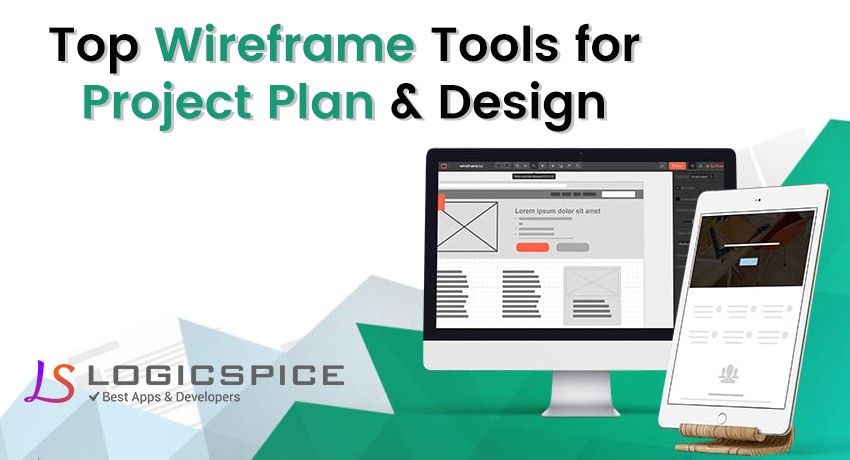 So, because of this improved way of communication about sharing the visual ideas, people take the help of wireframe tools or mockups for the better understanding of client and application designer/developer. Some of the popular wireframe tools are suggested below;

Lucid-chart is a free wireframe builder tool & it generally offers the simplest coordinated effort for the wireframing as it allows multiple designers to edit same wireframe at the same time concurrently. It has the add-on chrome facility which make it simple or easy to add the Lucidchart diagram on the Google docs sheets.

Moqups is also a wireframing tool which comes with the cloud based design option and it is also equipped with the library which consists of icon sets and stencils. This also allows to import own images so that it could be a match with the designers sites look & feel. It also provides drag & drop editor facility which allows the team to inherit the design wireframe of flowcharts, storyboards and sites.

Template Toaster is another type of wireframe tool which is desktop based wireframing tool. It helps a lot to reduce the difficulty of the coding and debugging which was used in the background for the foundation of a strong website. This wireframing tool is not available for free. Designers need to pay to use this wireframe tool and it has two paid plans professional and standard.

It consists of very big library which consists of pre-build templates, stock images & build-in icon sets. It also allows to upload on the server & designer ask for feedback from the client on this tool itself.

InVision provide the cloud based solution for the website or app wireframe. This platform supports the Android, Web platform & iOS. It also allows to create wireframe with the clickable prototype. It has the drag & drop functionality and it’s clickable prototype provides an easy access between different sketches & images.

Balsamiq mockups is most popular wireframe tool which is generally used by most of the designers. It is rapid wireframe creation tool, that allows the designers to design the wireframe faster. The balsamiq mockups provide the same feeling of sketching that designers used to do with the pencil but it provides the digital touch. Platform like web-based , macos & windows are supported by the balsamiq. The mockup which is developed over the balsamiq could be printed on paper easily. It runs online where user can test too. It also allows the designer to work offline as well. It is paid tool & it is used to offer a 30 days free trial.

It is used to provide the entire design of the templates that helps the designers to create a website or app blueprints, sitemaps & more. It is a web app based solution. It also provides the facility where designer could use the third party templates, components & layouts. It also includes the navigation elements, shapes, form & icons, to make the wireframe that is similar to the future website or app

Above different types of wireframes are discussed and they all have some specific characteristics. The FairBuilder is also a type of wireframe tool but it is only used for Mac. With this wireframing tool, designer can create the wireframe by dragging and clicking. It is a paid tool.

The Fluid UI's is wireframing tool which is cloud-based wireframing solution. It is used to provide the library for the designers that has more than 2000 elements. In this designers can create the animations pages for getting the better ideas that how the end product going to be look like. It is available for both android and iphone app

Pencil wireframing tool, helps the designer for prior planning of the software project functionality and flow of operations. It helps in a great way for designing of the website and mobile apps. The pencil is desktop based wireframing tool. This wireframe tool is available as open source which means that every user can use its all the feature. All the features are available for free no need to pay. Time to time its update also used to com. Last update of this software came in 2017. It is used to allow the designer to create the multiple pages and that pages could be linked with each other. It is also available for the android and ios stencils for designing the mobile app.

Generally the designers do not think to use Photoshop for preparing the wireframes. Photoshop is used to combine the different elements & the graphics into a wireframe. If the designer is familiar with this adobe graphic designing tool, then it’s easier for them to make wireframes using this. The designer can draw the wireframe quickly by this wireframe tool.

It is used to design complex or simple diagram or wireframe. It is used to include the wide variety of existing stencils, shapes and objects to work with it. If user wants to develop it on their own, then they are allowed to design their own. 3D design are also created with the help of it.

Thank you! We have received your comments and our team will get back to you soon.